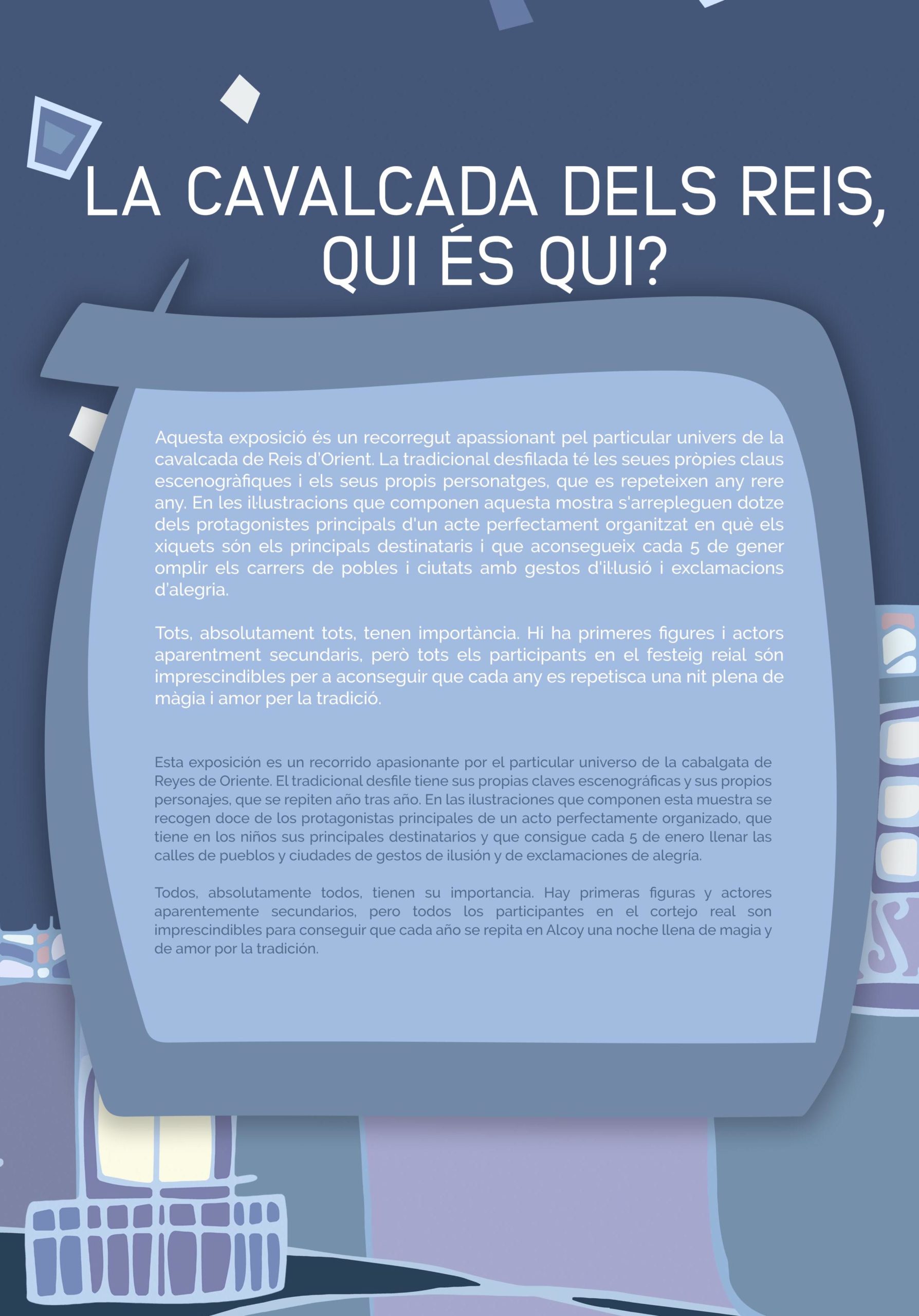 The Cavalcade of the Magi: who is who?

This exhibition takes us on a fascinating journey through the unique Cavalcade of the Magi. First held more than a century ago, this parade has distinctive staging elements and characters, year after year. The pictures displayed here show twelve of the main characters featured at this perfectly organised event, primarily targeted at children. Every year on 5 January, the Cavalcade brings hope and joy to the streets of towns and cities.

Everyone, absolutely everyone, is important. Whether in a leading role or as a supporting player, each participant in the royal pageant is essential in order to, once again, enjoy a night full of magic and love for tradition. 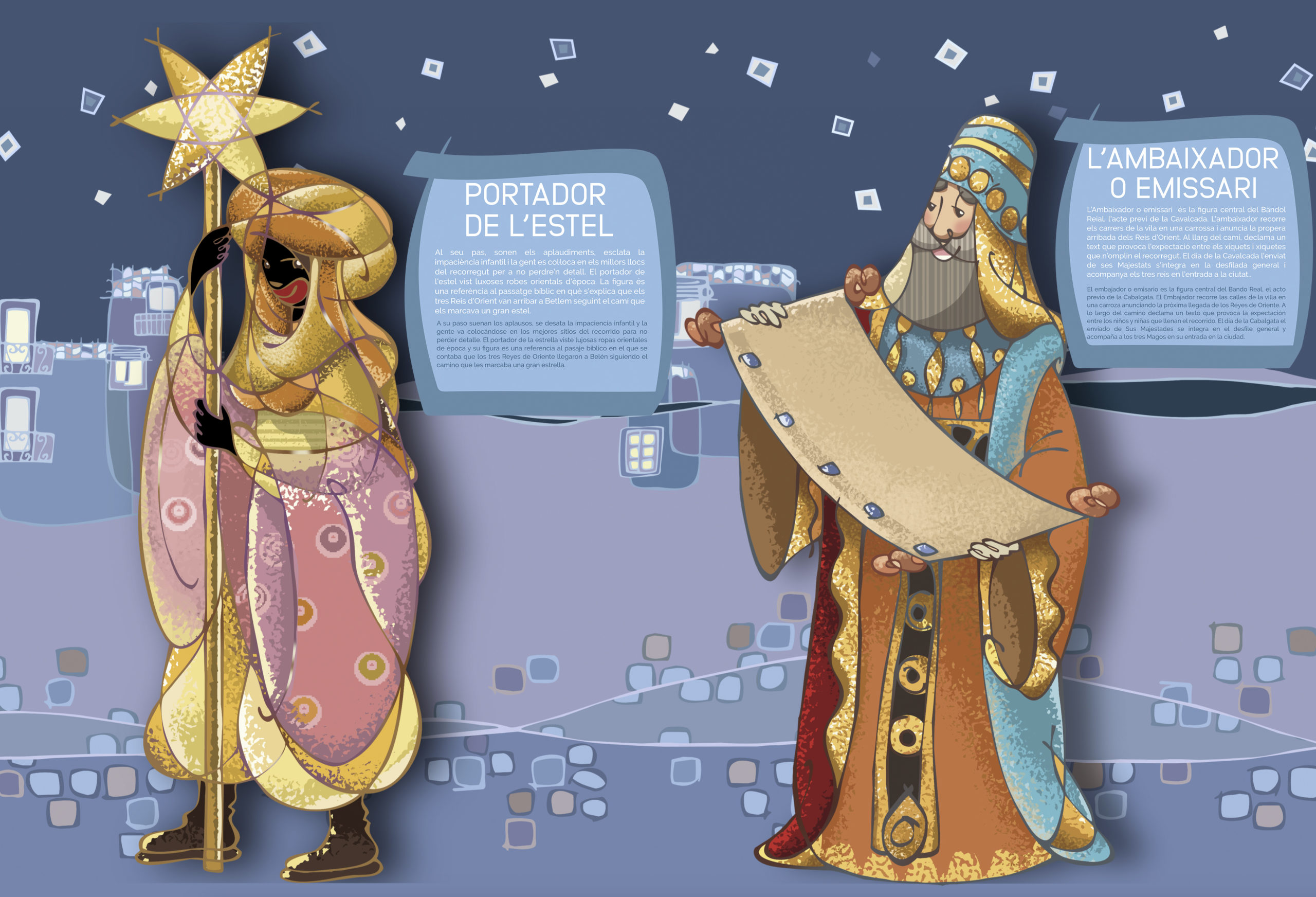 As the star bearer passes, the crowd claps, the children become impatient, and everyone tries to get the best spot so as not to miss a thing. This character, dressed in lavish oriental costumes from the period, is a reference to the biblical episode in which the three Magi arrived in Bethlehem guided by a bright star.

The ambassador or emissary

The ambassador or emissary is the central character of the Royal Proclamation, the event that takes place ahead of the Cavalcade. Riding on a float, the ambassador winds through the streets of the town to announce the arrival of the Magi, reading the proclamation for all the expectant children to hear. On the evening of the Cavalcade, the ambassador takes part in the parade and accompanies the Magi as they enter the city. 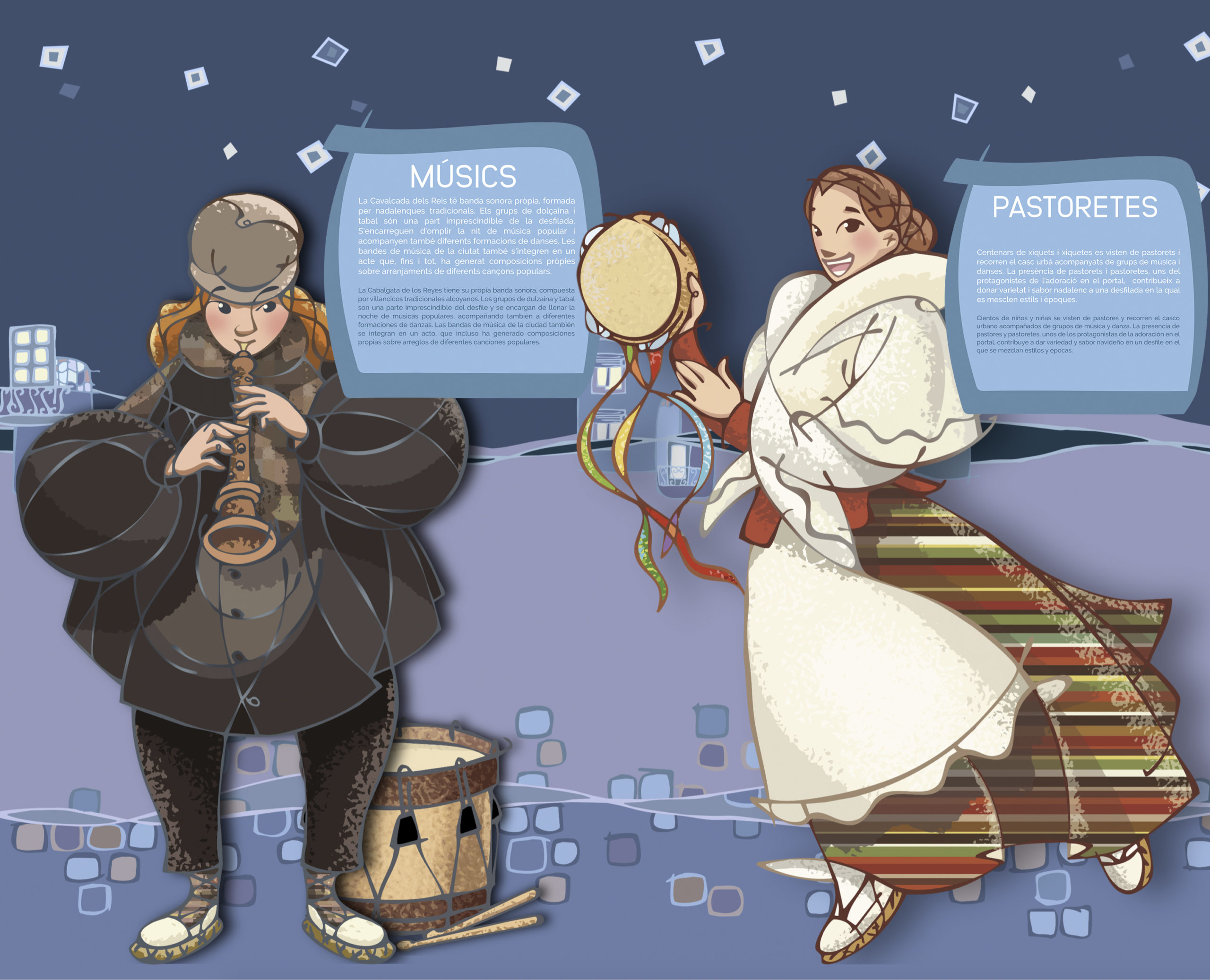 The Cavalcade of the Magi has a musical repertoire of its own, made up of traditional Christmas songs. The event would not be the same without the dolçaina and tabal players, who perform popular music during the evening and accompany several groups of dancers. The music ensembles from the city also participate in a spectacle that has given rise to new compositions based on arrangements of popular songs.

Hundreds of children dress up as shepherds and march through the streets alongside groups of musicians and dancers. The presence of the shepherds, who visit the Christ Child in the stable to worship him, adds to the Christmas spirit and provides a taste of the many styles and periods we can find at the Cavalcade. 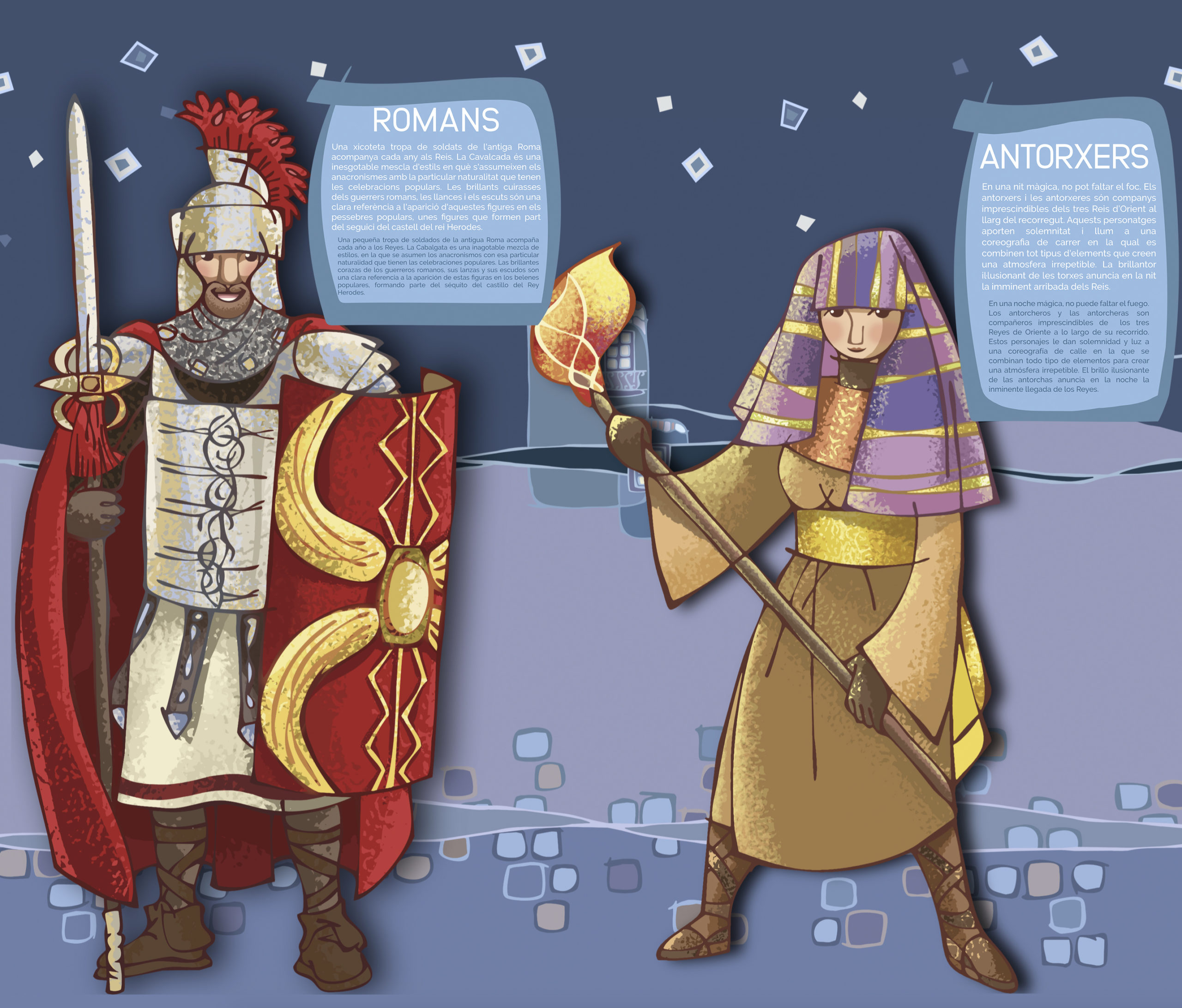 Every year, the Magi are accompanied by a small troop of Roman soldiers. The Cavalcade is an impressive showcase of different styles and, as is typical of popular celebrations, anachronisms are naturally accepted. These Roman warriors, with their shining armours, spears and shields, are a clear reference to the soldiers that appear in popular nativity scenes, where they are part of King Herod's entourage at his castle.

On a magical night, fire is a must. The torch bearers are key members of the Magi's retinue during the Cavalcade. These characters provide light and a sense of solemnity to a street spectacle that combines all sorts of elements to create a unique atmosphere. In the evening, the wonderful light of the torches indicates that the Magi are about to come. 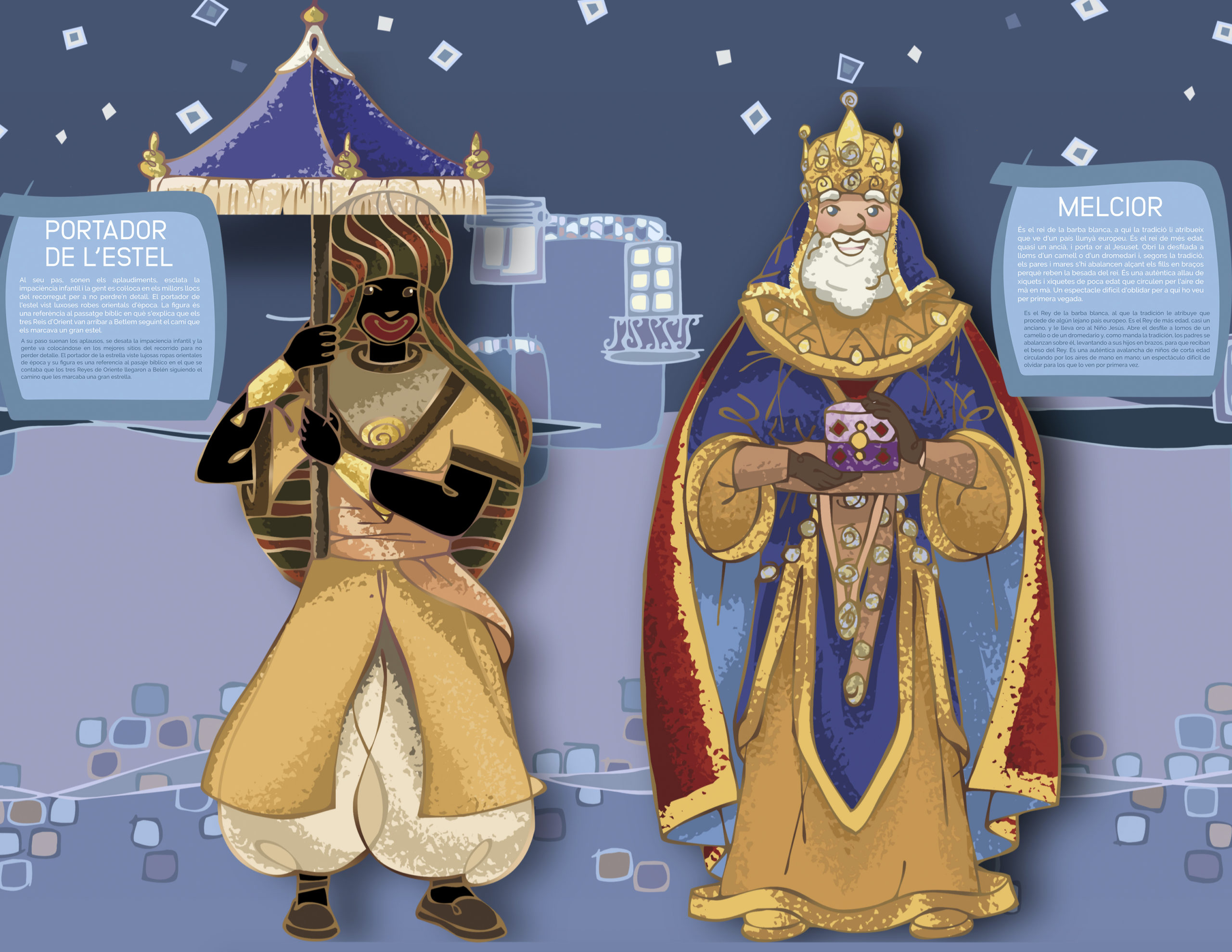 The white-bearded king, traditionally said to hail from a distant European country. He is the oldest of the three, almost an elderly man, and brings gold to the baby Jesus. Melchior leads the procession on a camel or dromedary. According to custom, the fathers and mothers rush towards him carrying their children, so that Melchior can kiss them. Lots of little children pass from one person to another in the air, in a scene that will not be easily forgotten by those who see it for the first time. 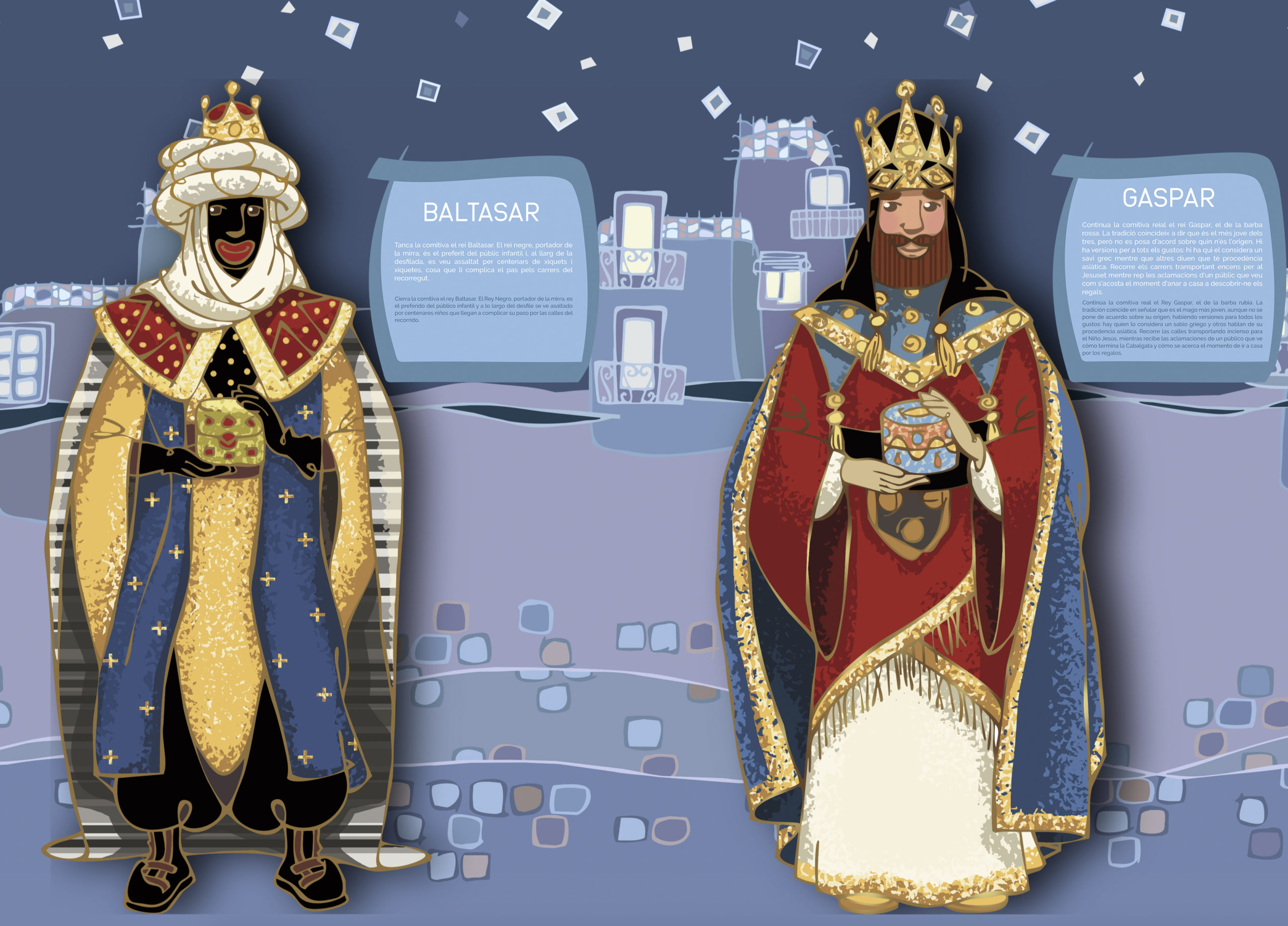 King Balthazar is the last of the Magi. The black king, whose gift is myrrh, is the children's favourite – in fact, he is surrounded by hundreds of little boys and girls during the Cavalcade, which slows him down as he advances through the streets.

After Melchior comes Caspar, the king with a blond beard. He is supposed to be the youngest Magus, but there is no consensus over his origins. Theories are many and varied: some say he is a Greek sage, while others think he is from Asia. Caspar makes his way through the streets to bring frankincense to the baby Jesus amidst a cheering crowd, as the time to open the presents at home comes near. 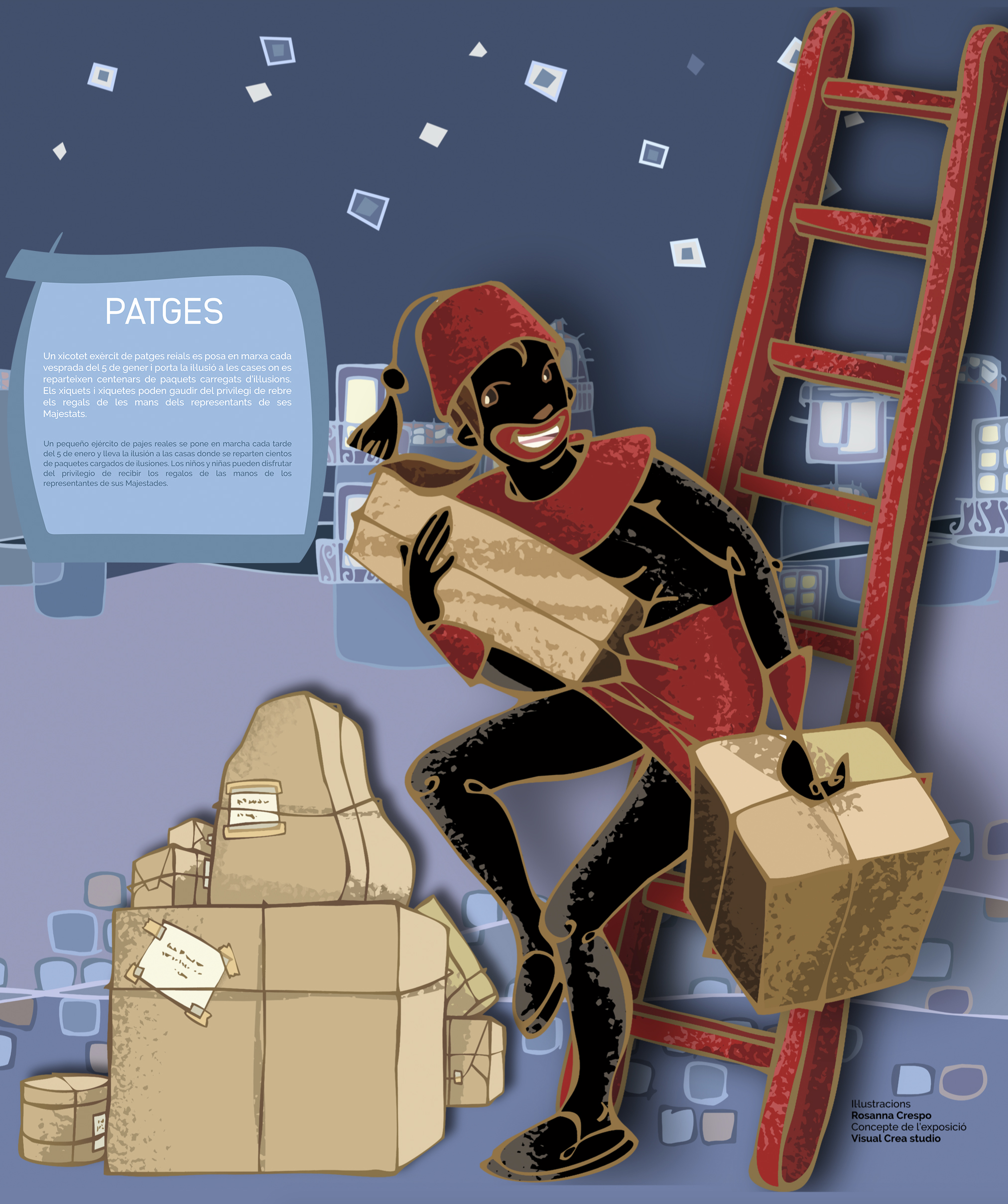 On 5 January in the evening, a small army of royal pages set out to bring joy to children in their homes. The delighted children receive their presents from the royal representatives.

This website uses cookies to improve your experience while you navigate through the website. Out of these, the cookies that are categorized as necessary are stored on your browser as they are essential for the working of basic functionalities of the website. We also use third-party cookies that help us analyze and understand how you use this website. These cookies will be stored in your browser only with your consent. You also have the option to opt-out of these cookies. But opting out of some of these cookies may affect your browsing experience.
Necesarias Siempre activado

Any cookies that may not be particularly necessary for the website to function and is used specifically to collect user personal data via analytics, ads, other embedded contents are termed as non-necessary cookies. It is mandatory to procure user consent prior to running these cookies on your website.