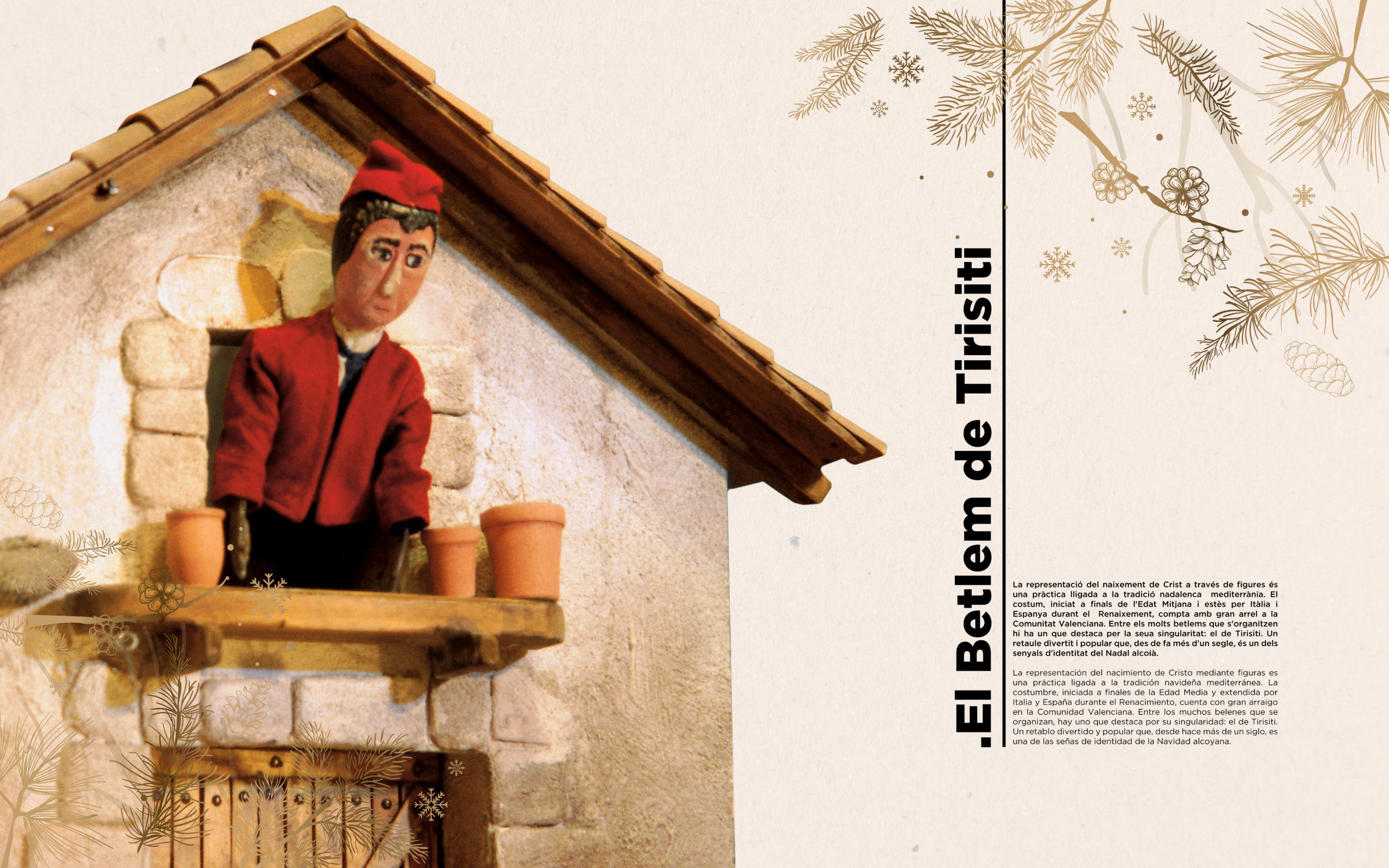 The representation of Christ’s birth using figures is a typical Christmas tradition in Mediterranean countries. Nativity scenes, which appeared in the late Middle Ages and spread across Italy and Spain during the Renaissance, have a long history in the Valencia Region. Among the many nativity scenes displayed every year, that of Tirisiti stands out as unique. Funny and popular, it has been a distinctive feature of Christmas festivities in Alcoy for over a century. 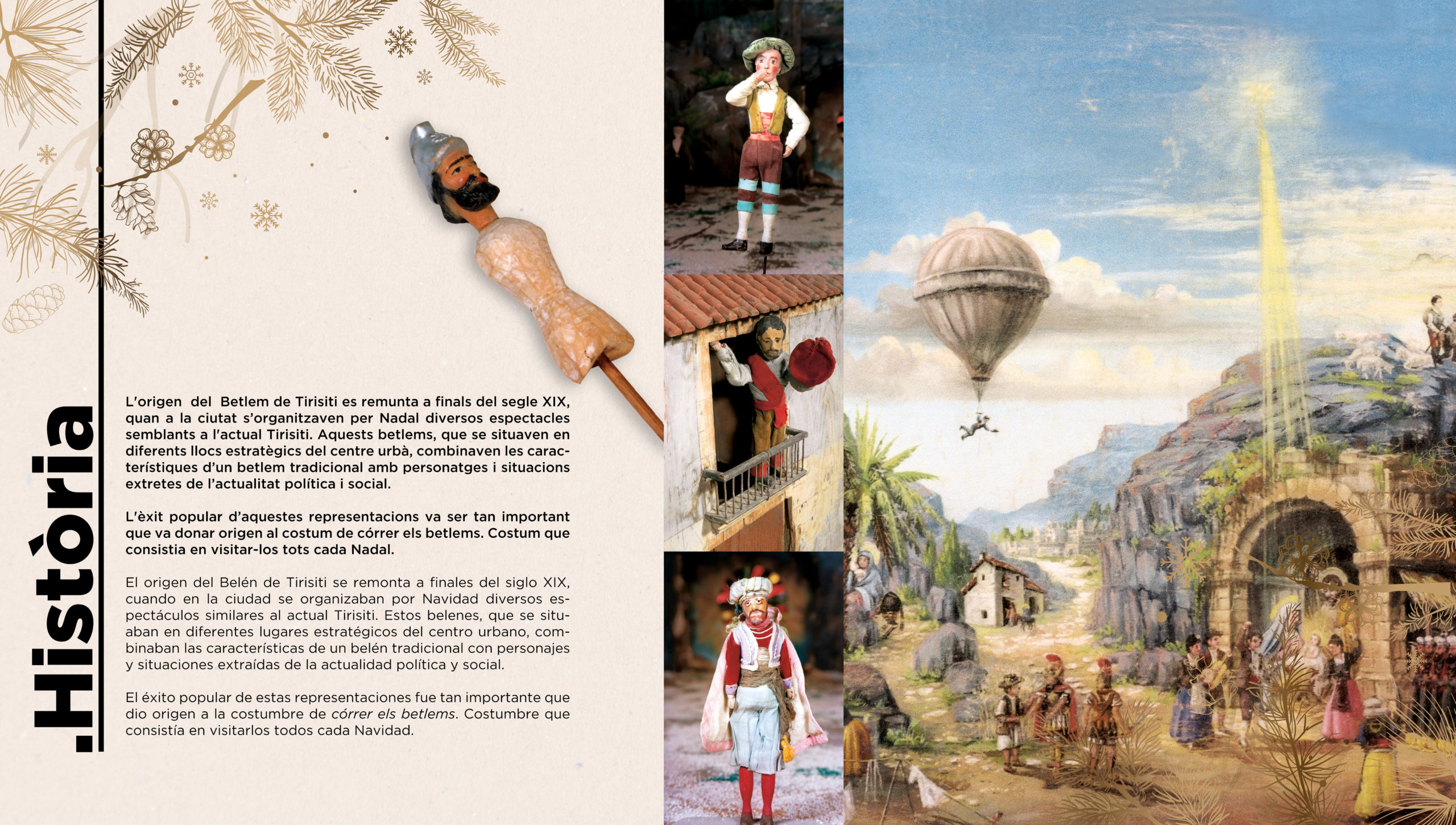 The Tirisiti nativity scene dates back to the late 19th century, when several events that were similar to the modern Tirisiti took place in Alcoy at Christmas time. Staged at key locations in the town centre, they combined the features of a traditional nativity scene with characters and situations based on the latest political and social developments.

These shows were so popular that “córrer els betlems”, that is, visiting all the nativity scenes every Christmas, became a tradition. 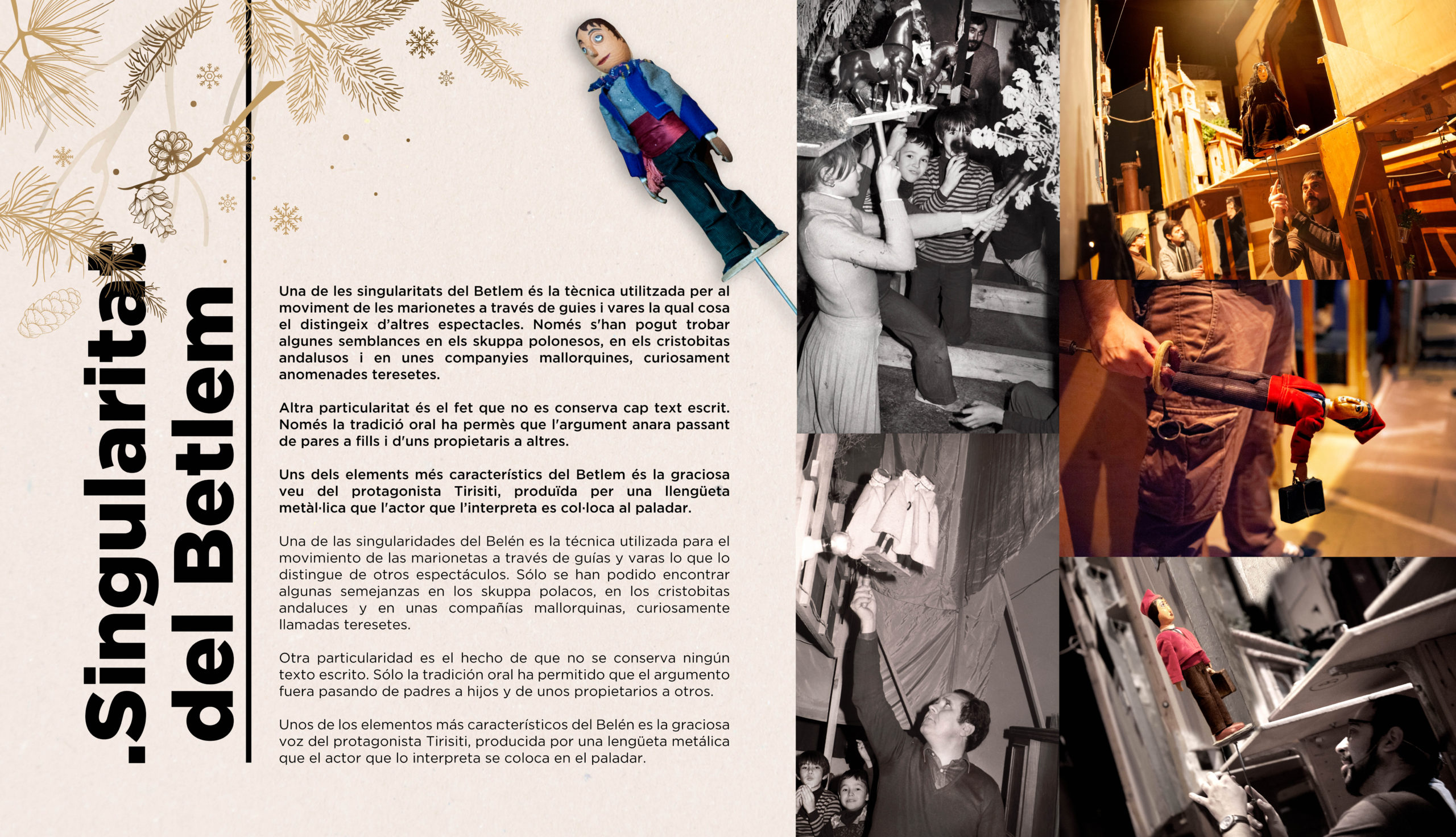 A singular feature is how the puppets are moved: they follow set paths and are manipulated by rods, which sets Tirisiti apart from other shows. The only ones sharing some similarities are Poland’s “skuppa”, Andalusia’s “cristobitas” and companies from Majorca which are, oddly enough, called “teresetes”.

Also noteworthy is that no written text is extant. The plot has been passed down from parents to children, and from some owners to others, exclusively through oral tradition.

One of the most remarkable elements of the nativity scene is the funny voice of the protagonist, Tirisiti, produced by a metal reed placed in the puppeteer’s palate. 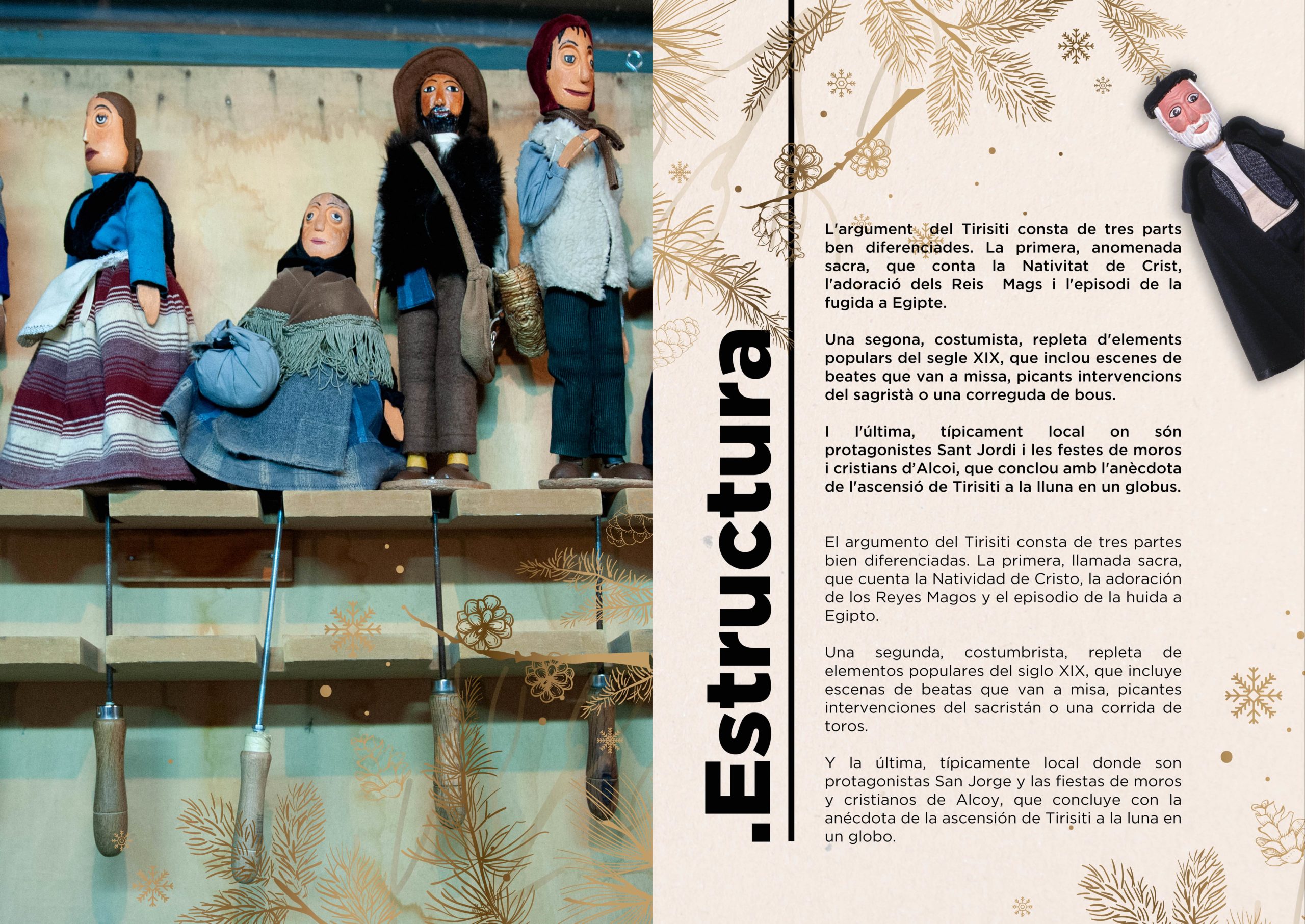 The plot of Tirisiti consists of three different parts. The first, the sacred part, gives an account of the nativity of Christ, the adoration of the Magi, and the flight into Egypt.

The second, reflecting the mores and manners of the time, has many popular elements from the 19th century, including scenes of religious women attending mass, racy remarks by the sacristan, or a bullfight.

The last part, typically local, focuses on St George and Alcoy’s “Moros i Cristians” (Moors and Christians) festival. It concludes with Tirisiti’s hot-air balloon trip to the Moon. 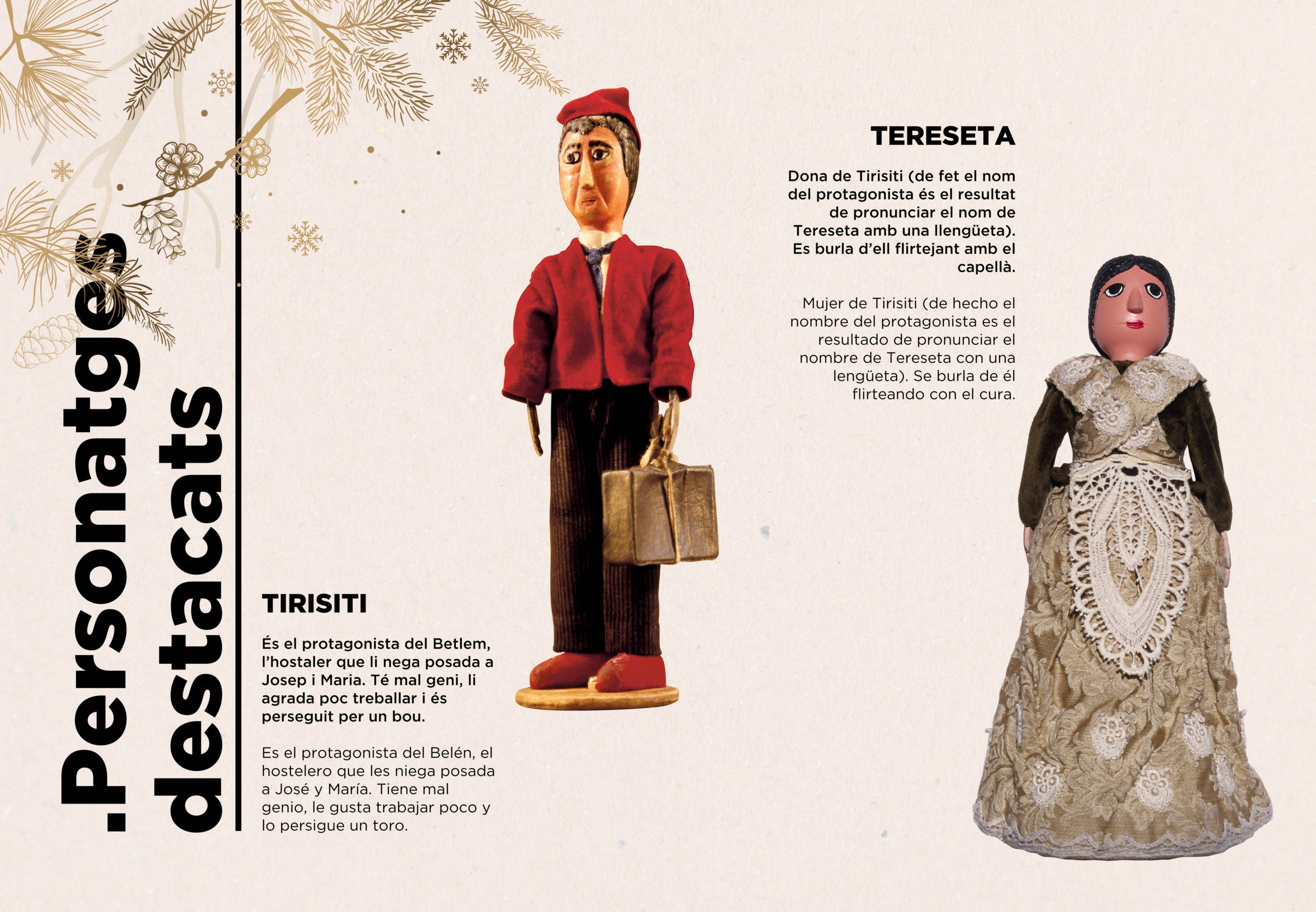 The protagonist of the nativity scene, an innkeeper who turns Joseph and Mary away. Bad-tempered and rather lazy, he is chased by a bull.

Tirisiti’s wife (in fact, “Tirisiti” is how “Tereseta” is pronounced with a reed in the puppeteer’s mouth). She teases him by flirting with the priest. 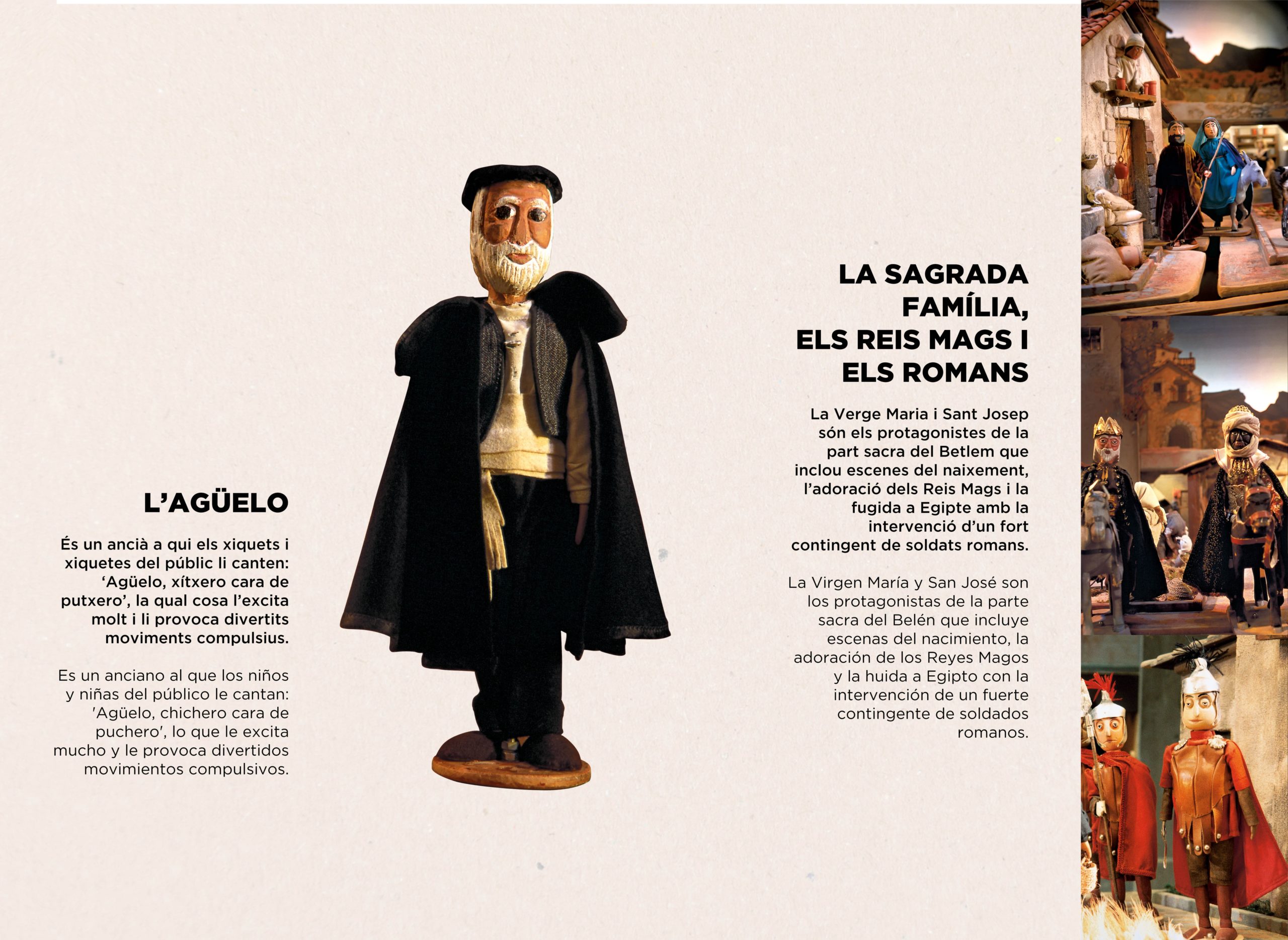 The Holy Family, the Magi and the Romans

The Virgin Mary and Saint Joseph are the leading characters in the sacred part of the nativity scene, with scenes of Christ’s birth, the adoration of the Magi and the flight into Egypt, which features a large contingent of Roman soldiers.

He is an old man, and when they see him the children in the audience sing this rhyme: ‘Agüelo, chichero cara de puchero.’ Then, really annoyed, he makes funny compulsive movements. 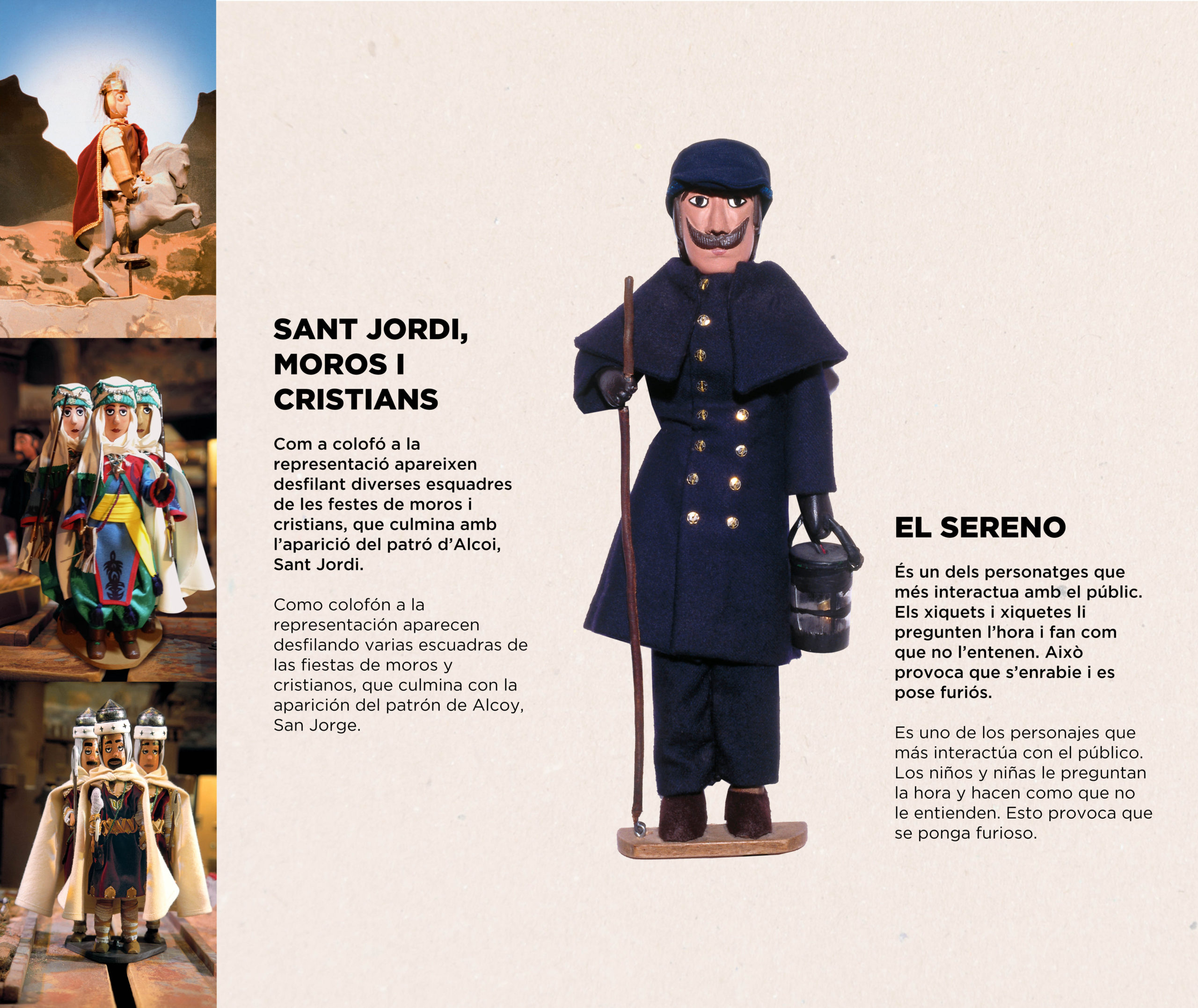 He is one of the characters the audience interacts the most with. The children ask him what time it is, then pretend not to understand him. This makes him furious!

The spectacle concludes with a parade of several Moor and Christian squadrons, with St George, patron saint of Alcoy, appearing at the end. 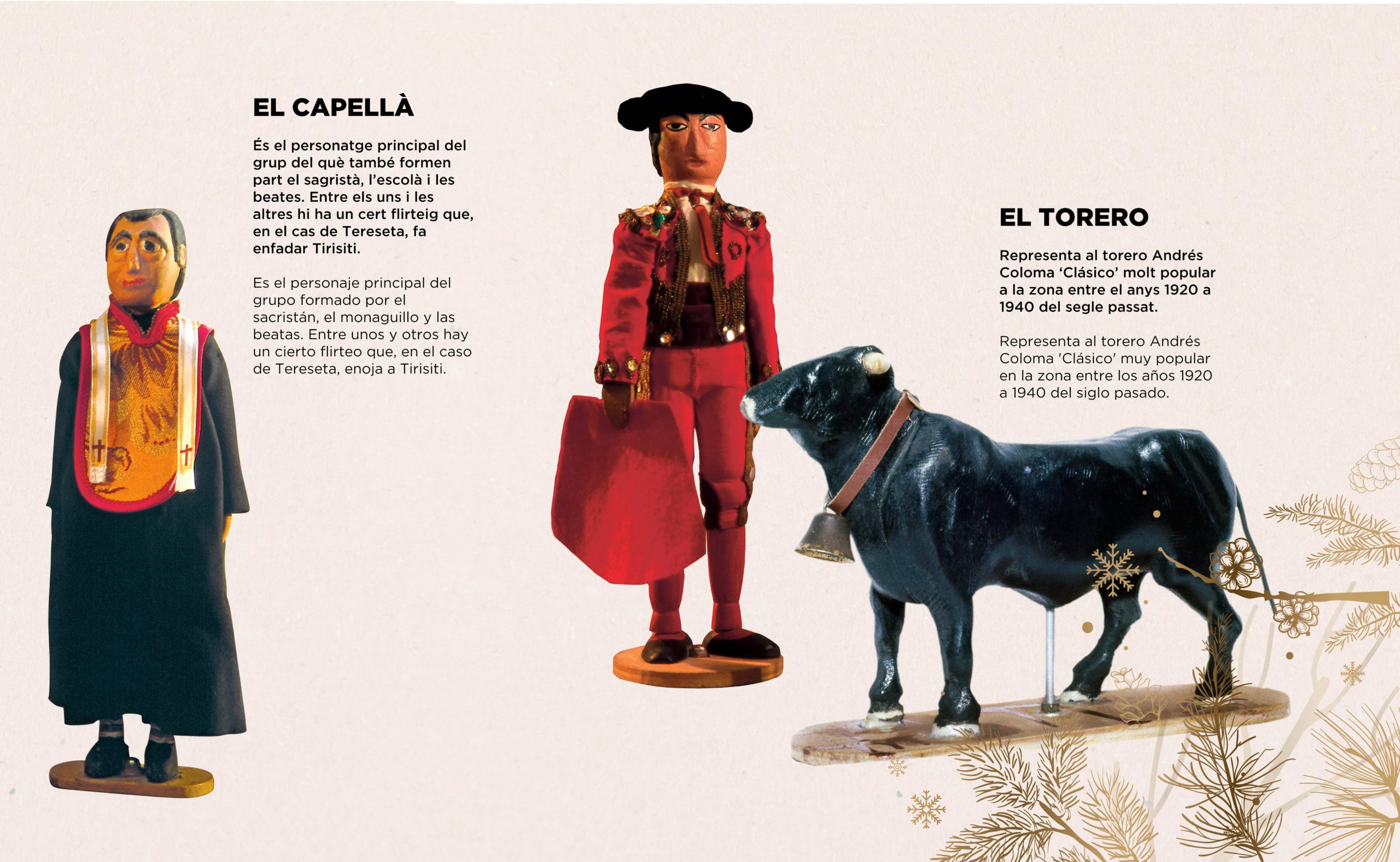 Main character of the group made up of the sacristan, the altar boy and the religious women. They flirt with other characters, which, in Tereseta’s case, makes Tirisiti angry.

He represents bullfighter Andrés Coloma ‘Clásico’, very popular in the area from the 1920s to the 1940s.

Alcoy Town Council has been responsible for the Tirisiti nativity scene since 1989, whereas the La Dependent theatre company is in charge of the performances.

In November 2019 it was recognised by the Association of Performing Arts Companies of the Valencian Country for the “perfect symbiosis” of this public-private proposal, which has successfully kept alive a puppet show that appeared in the late 19th century.

This exhibition pays tribute to the ‘Sargero’, the ‘Cullerotero’, José Esteve Carbonell (senior and junior), Rafael Coloma, sculptor Llorens Ridaura, carpenters Julià and Papachi, José Peidro “Foya”, the Association of Friends and Ladies of the Magi, the Diamante y Rubí puppet company, artist Alejandro Soler, Alcoy Town Council, La Dependent, and all the people and institutions that have preserved Tirisiti’s magic and illusion for more than a century.

This website uses cookies to improve your experience while you navigate through the website. Out of these, the cookies that are categorized as necessary are stored on your browser as they are essential for the working of basic functionalities of the website. We also use third-party cookies that help us analyze and understand how you use this website. These cookies will be stored in your browser only with your consent. You also have the option to opt-out of these cookies. But opting out of some of these cookies may affect your browsing experience.
Necesarias Siempre activado

Any cookies that may not be particularly necessary for the website to function and is used specifically to collect user personal data via analytics, ads, other embedded contents are termed as non-necessary cookies. It is mandatory to procure user consent prior to running these cookies on your website.